Our energy system is ever-evolving. Over the past 200 years, we’ve seen a huge shift in our energy consumption and production. From the start of the industrial revolution, where coal was the central cog keeping the world ticking, to now where renewable and alternative energy is taking the world by storm.

Matthias Schnellmann chairs a group of other early-career professionals from across the energy sector, known as IChemE’s Future Energy Leaders. Together, they help to support the IChemE Energy Centre, engaging with policy debates, responding to consultations and producing original research and position papers. The group also lead on public engagement activities that support the centre’s priorities. 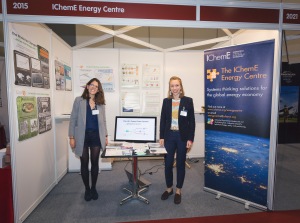 In October, Matthias and his colleagues represented the IChemE Energy Centre at New Scientist Live – one of the UK’s largest scientific festivals. With interactive presentations and posters, they gave other engineers, scientists and students visiting the four-day event at ExCeL London just a glimpse into the complexity of our energy systems.

In this post, Matthias tells us how it went, and why it’s so important that engineers work together to address the challenges of the future.

IChemE role: Chair of Future Energy Leaders and group representative on the IChemE Energy Centre Board

Bio: Matthias is currently a PhD researcher at the University of Cambridge and holds a MEng (Hons) in Chemical Engineering from the same university.  His interests lie in modelling energy technologies and chemical processes at multiple scales, ranging from the fundamental science underpinning them to their implementation at industrial scale. He has been actively involved with the Future Energy Leaders since the group began in June 2016.

We use energy in everything we do. Make a cup of tea, that’s electricity. Driving your children to school or yourself to work, your car will be utilising an optimum mix of fuel and air in the combustion chamber to generate just the amount of energy to get you safely on your journey. Some vehicles might even be using alternative or renewable fuels, such as natural gas, propane, biodiesel, ethanol or electricity. And let’s not forget about all those hundreds of thousands of people employed in the various sectors of the energy industry working on the best processes and extracting the materials that allows our fast-paced world to keep moving.

I’m, of course, over-simplifying just how precious our energy sources are and the vast amount of work that has taken place to get us to this point.

If we look back in history, the industrial revolution was a huge turning point for mass production, allowing people and businesses to travel and transport goods far and wide. Coal was the key energy driver enabling this. Following that, at the turn of the 20th century, oil grew and gained a significant share of the energy market.

Since then, our energy sources broadened to include gas, hydro and nuclear, as electricity grew as an energy vector. In the past decade wind and solar have rapidly become fruitful sources of energy to generate electricity.

But what was clear to the visitors at our stand at New Scientist Live was that our primary source of energy has been fossil fuels since the mid-1700s. With that has come carbon dioxide emissions, the major cause of climate change. These emissions are now at such an extent, that the World Economic Forum in 2016 described it as the ‘biggest threat to the global economy’.

It’s a huge challenge to work on correcting this and it’s not a simple fix. Through an interactive presentation we introduced visitors to electricity system models. Using videos and graphics, the presentation took visitors through the process of how these models are put together.

While such models are, of course, an abstraction of the real world, they are very useful for understanding the interactions between different technologies and the implications of decision making.

The presentation finished by showing three potential scenarios for a future electricity system in the UK, all of which would lead to complete decarbonisation by 2050.

The first was a high nuclear scenario, equivalent to the construction of 1.5 Hinkley Point power stations every five years. Even at this high rate of construction, nuclear would only contribute around 40% to the electricity mix.

The second was a high wind and solar scenario, where 4GW of capacity was added each year. This is similar to the current build-rate. The challenge with renewables is that they generate electricity intermittently and so a large amount of back-up capacity was required in this scenario.

Finally, a more balanced scenario was shown. As well as an increase in nuclear and renewable capacity, this third scenario also included significant deployment of thermal power plants with carbon capture and storage technology. You can read more on our interactive presentation here.

All of this showed that no single technology alone will provide a solution. Rather, a combination of technologies will be needed if we are to stay below the 2⁰C target that was agreed at COP21 in Paris in 2015. More importantly, our energy system will need to evolve significantly faster than in the past to achieve this.

The event also gave us a great opportunity to introduce visitors to chemical engineering more generally – especially the various students, school children and teachers that came to speak to us. It was here that we highlighted whynotchemeng, which aims to promote the diverse range of careers in chemical, biochemical and process engineering to school students aged 14-18.

It was amazing how interested people were in energy and their desire to learn more about the transition we will need to make to ensure our planet is sustainable. I hope we’ve inspired some more future energy leaders.

If you would like to find out more about the Energy Centre or the Future Energy Leaders, please visit www.icheme.org/energycentre.