A cold, bright day in February saw more than circa 3,000 chemical engineering students from every corner of the British Isles gather at Loughborough University for the annual Frank Morton Sports Day.

The event has grown spectacularly from its modest beginnings in 1961 when IChemE stalwart, Professor Frank Morton, organised a football match between the chemical engineering departments at the University of Birmingham and the then University of Manchester Institute of Science and Technology.

The University of Birmingham ran out overall winners for a third year running, narrowly beating Strathclyde into second place, with the hosts Loughborough, a strong third. Birmingham was victorious in only three events: hockey, table tennis and pool. However, excellent strength in depth across all 18 competition categories delivered a further ten podium positions and a winning points total of 25.

Strathclyde, who had travelled through the night in order make the 8am start time, took first place in Badminton, Frisbee, Netball, Rugby and Volleyball to accumulate 21 points.

Birmingham were declared winners shortly before 6pm to euphoric celebrations from their several hundred competitors and supporters, instantly recognisable in their ‘Captain Brumerica – The Chemengers Assemble’ t-shirts, designed by team members Christopher Beale and Adam Cullen.

The trophy was presented by the President of the Loughborough organising committee, Calum Blair, who praised Birmingham for their outstanding competitive spirit.

The partying then continued into the night with an all-star entertainment line-up in the Loughborough University Student Union that included chart topping indie-pop band, The Hoosiers and DJ’s Tim Westwood and Scott Mills.

Many competitors were quick to praise the Calum Blair’s team for their superb organisation in 2017.

“What an amazing Frank Morton. The day was very well organised and the sports were so much fun. Time keeping was very good from the organisers and the night out was brilliant too.”

Edinburgh’s Chelsea Cormack added: “Loughborough was the best Frank Morton I’ve been to in three years so far. Thanks for organising such a great day for everyone.”

The Frank Morton Sports Day is organised autonomously by chemical engineering student volunteers who find the time to plan, organise and deliver the biggest sporting event of its kind in the UK, in addition to their undergraduate lectures, labs and seminars.

IChemE Director, Andy Furlong, who was invited to act as the compère for the opening and closing ceremonies in Loughborough, said:

“The Frank Morton Sports Day has now become something of a modern day phenomenon and a rite of passage for chemical engineering undergraduates in the UK and Ireland.

“The mere mention of the word

s ‘Frank Morton’ often brings a pained expression to the faces of senior chemical engineers in their forties and fifties who are suddenly reminded of the bruises and hangovers from their own undergraduate exploits.

“It’s part of the glue that bonds the chemical engineering community together, and the Institution was delighted to support Calum and his committee. Their volunteer effort captures the very essence of what IChemE is all about.

“Stepping on stage in front of 2,000 pumped up young chemical engineers is, quite frankly, a terrifying experience.  But I was relieved to discover that the DJ, Tim Westwood is 59, thus I wasn’t the oldest person in the room!”

The baton will now pass from Loughborough to an as yet unannounced host for 2018. The Loughborough Committee will conduct a detailed project debrief before receiving bids from parties interested in staging next year’s event. The indomitable spirit of a fun loving chemical engineering professor who died in 1999 will continue to burn brightly.

To view the Frank Morton 2017 photo gallery, head to our Facebook page. 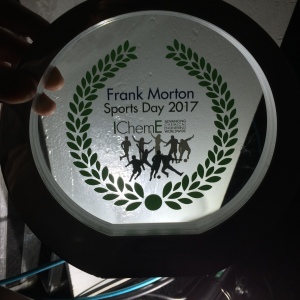 The chemical engineers from QUB went with a popular theme for Frank Morton 2017 t-shirts – US politics.

BACK: “We’ll build the biggest distillation column…and the chemists are gunna pay for it!”

Will Law – Opening and Closing Organiser