Researchers at North Carolina State University, US, (NCSU) are investigating the use of ionic liquids to strip lignin from plant cells. Their aim is to find a cost-effective method of processing biomass for biofuel production.

Lignin is a complex phenolic polymer that is found in plant cell walls. It plays an important structural role, providing the plant with strength and rigidity due to a cross-linked structure that is difficult to break down. After cellulose, it is the most abundant source of renewable carbon on earth.

Plant cell walls generally comprise  layers of celullose, intervoven with lignin. Cellulose from food crop residues is potentially a valuable feedstock for biofuel production. However, it is difficult to extract. Optimising the cost-effection production of cellulosic biofuels is an area of extensive research interest for chemical engineers

Normally, lignin is broken down by reducing biomass to a small particle size and treating it with an acid or an akali to release the cellulose in a process described as kraft pulping. This is commonplace in the papermaking industry.

The NCSU team, led by Ezinne Achinivu, a PhD student in the department of chemical and biomolecular engineering, has published an article in the journal Green Chemistry describing Lignin Extraction from Biomass with Protic Ionic Liquids.

The research team used corn stover – a residue from maize production –  as their biomass surrogate. They mixed samples of the biomass with the PIL, causing the lignin to dissolve and leaving a cellulose rich residue which is readily processed into sugars and, subsequently, to bioethanol. 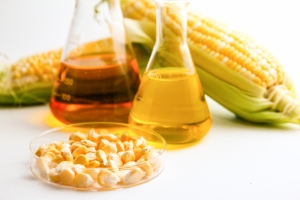 PIL-lignin mixtures can be separated by conventional distillation. The PIL can be recovered and reused. The lignin is left behind as a black powder.

This process for isolating lignin may be very significant, because at present the economics of bioethanol production from corn stover are challenging. However, ligin is a potential building block for higher value chemicals.

Ezinne said: “Finding inexpensive ways to remove lignin is one of the largest barriers to producing cost-effective biofuels. Our approach is very promising. This PIL-based technique can be easily scaled up and is likely to be both more energy efficient and less expensive than existing biomass pre-treatment techniques for removing lignin.”

Lignin is a complex molecule and its structure varies from one plant species to another. The action of PILs needs further research in order to determine the most effective formulation for different types of biomass, including forestry waste products.

If you are working with biofuels why not get in touch and tell us about your research.