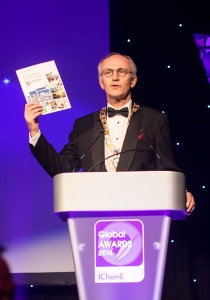 It’s time for another round -up of our IChemE Global Awards 2016 winners, and this time we’re focusing on sustainability.

In our modern world projects that deliver a sustainability benefit are usually successful. In fact, all our winners this year have demonstrated some kind of sustainable element in their work. Whether it’s taking on large projects, developing products for poor communities, or innovating to change lives.

But these winners have put sustainability at the heart of what they do. Pushing the limits to find the most environmentally-friendly way of doing things, some of them are also very young companies – and ones to watch in the future.

So please take a look at the following three winners videos, and as always thanks to Morgan Sindall for helping us to produce them.

END_OF_DOCUMENT_TOKEN_TO_BE_REPLACED

We all want to make a good first impression, but when we feel anxious our body responds by sweating and this can result in an unappealing body odour.

When we want to make the right impact at an interview or on a date, we need a little help to make sure we are smelling fresh.

So fear not. There’s now a perfume that improves its performance the more we sweat.

Researchers at the Queen’s University Ionic Liquid Laboratories (QUILL) Research Centre in Belfast have developed a unique perfume. It releases its aroma the more it comes into contact with moisture. So the more you sweat, the better you smell!

END_OF_DOCUMENT_TOKEN_TO_BE_REPLACED

Skin cancer is amongst the most common forms of cancers in the world with its highest incidence in Australia, New Zealand, the US and Europe.

The World Health Organisation (WHO) estimates that between two to three million non-melanoma and 132,000 melanoma skin cancers are diagnosed each year.

So researchers from the School of Chemistry and Chemical Engineering at Queen’s University Belfast, UK, have developed an early warning sunburn indicator that could tell sunbathers when to take to the shade.

The team, led by Dr David Hazafy, have developed a strip of plastic – containing ‘smart’ ink – which turns colourless from an initial blue colour to indicate a high exposure of ultraviolet light from the sun. This should prompt the user to move into the shade before burning, reducing the risk of skin cancer.