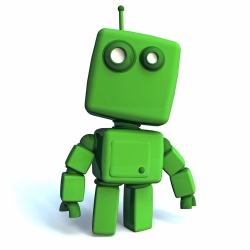 When I think of ways to describe robots I might use words like advanced, intelligent, practical, metallic… but never squishy!

However, today’s story comes from a team of chemical engineers who are working to create squishy robots by designing a synthetic gel.

The team, from the University of Pittsburgh‘s Swanson School of Engineering, US, have developed a computational model which has allowed them to design a new material. The material has the ability reconfigure its shape and move using its own internally generated power. This ability to change was seen as a catalyst for the development of a soft robot.

This research, undertaken by Dr Anna C. Balazs, Professor of Chemical and Petroleum Engineering and Dr Olga Kuksenok, Research Associate Professor, uses a single-celled organism, Euglena mutabilis, as a model. E. mutabilis is able to process energy to expand and contract its shape. This results in movement.

“Movement is a fundamental biological behaviour, exhibited by the simplest cell to human beings. It allows organisms to forage for food or flee from predators. But synthetic materials typically don’t have the capability for spontaneous mechanical action or the ability to store and use their own energy, factors that enable directed motion” Anna said.

She continued: “Moreover in biology, directed movement involves some form of shape changes, such as the expansion and contraction of muscles. So we asked whether we could mimic these basic interconnected functions in a synthetic system so that it could simultaneously change its shape and move.”

This work has been published in the journal Scientific Reports under the title: ‘Designing Dual-functionalized Gels for Self-reconfiguration and Autonomous Motion’.

To mimic mobility of E. mutabilis‘, Anna and Olga looked at polymer gels containing spirobenzopyran (SP). This material that can morph into different shapes by using light. The material, Belousov-Zhabotinsky (BZ) was also studied. BZ is a material that undergoes periodic pulsations and can be driven to move in the presence of light.

Olga explained: “The BZ gel encompasses an internalized chemical reaction so that when you supply reagents, this gel can undergo self-sustained motion.

“Although researchers have previously created polymer chains with both the SP and BZ functionality, this is the first time they were combined to explore the ability of “SP-BZ” gels to change shape and move in response to light.”

Anna and Olga’s work has managed to incorporate both the ability of SP gels to change shape with light and BZ gels’ mechanical actions.

According to Anna, there were unexpected results during their research: “Uniform light exposure doesn’t work. We had to place the light at the right place in order for the gel to move. And if we change the pattern of the light, the gel displays a tumbling motion.

“We also found that if we placed the SP in certain regions of the BZ gel and exposed this material to light, we could create new types of self-folding behaviour.”

Anna thinks these SP-BZ gels could enable the creation of small-scale soft robotics for microfluidic devices that can help carry out multi-stage chemical reactions. She said: “The next push in materials science is to mimic these internal metabolic processes in synthetic materials, and thereby, create man-made materials that take in energy, transform this energy and autonomously perform work, just as in biological systems.”

The advantage of using polymer gels instead of metals to make soft robots greatly reduces their mass and thus improves the potential to complete a range of motions.

“To put it simply, in order for a robot to be able to move more autonomously in a more biomimetic way, it’s better if it’s soft and squishy,” Olga says.

“It’s ability to grab and carry something isn’t impeded by non-flexible, hard edges. You’d also like its energy source incorporated into the design so that it’s not carrying that as extra baggage. The SP-BZ gel is pointing us in that direction.”

I would like to congratulate the team on their excellent research and look forward to seeing squishier robots in the future!